Hole in the Wall, Monmouthshire

Limekiln as its generally known, or Chapel Hill Road as it’s officially known, or Hole in the Wall by local laners, is a classic green lane in Tintern in the Wye Valley in Monmouthshire. It rises uphill in a South Westerly direction and starts quite close to the popular Tintern Abbey ruins. The lane is a favorite with MPV users, both local and from further afield. It is a challenging lane noted for the slippery rock steps half way up. It is sometimes also known as Coldwell Lane. Coldwell being the stream that is formed off the local land and runs alongside the lane down into the river Wye at Tintern.

A minor landslip had occurred in the sunken part of the lane approximately two thirds of the way up and close to the start of the Coldwell stream. Water running off and under the adjacent land appeared to have eroded the bank and expose tree roots. Several tonnes of soil with a few small trees had slipped into the lane creating a blockage. With the high banks and fields on either side there was no alternative route. The lane surface in the area was also quite muddy and various ruts had been formed by passing traffic.

I first became aware of the issue on the 19th January when a post was put up on the TRF Trail Facebook page by Dean Allen reporting the road was closed. Further research indicated the lane had been closed since a council engineer’s inspection on the 31st Dec 2018. A six-week temporary traffic regulation order came into force on the 30th Jan 2019.

From other Facebook posts it appeared the local Green Lane Association rep John Askew was already aware of the issue. Having recently joined the Green Lane Association in December, I decided to make contact with John and see what help I may be able to provide. It was evident that John had good links with Monmouthshire County Council (MCC) as he had mapped the county lanes by studying council documents. He had also been trained by them in the use of a chainsaw. A good man to know! John had made contact with the engineer in charge and together had visited the site to establish what needed doing. Separately Rod Jones a member of West Glos and Forest of Dean motorcycle club, and also a TRF member had been chivvying the council to make progress. Rod being this year’s Clerk of the Course for the Wyegate long distance trial knew that the lane was a key feature of this classic event. At least one and sometimes three sections are marked out on the lane. I had ridden the lane a few times both up and down and was entered in last year’s Wyegate Long Distance Trials but couldn’t make the rescheduled date. The original date was cancelled due to the heavy snow at the time. If I wanted to ride Limekiln in the Wyegate this year I needed to do something to help get it open again. The trial being scheduled for the end of April 2019.

On the 13th Feb 2019 the local newspaper, the Monmouthshire Beacon, ran an article reporting that the landowner (on the landslip side) had been told by Monmouthshire County Council that they would pass the bill for the repair onto them. In a later edition letters were published from locals complaining about the use of the lane by MPVs (Mechanically Propelled Vehicle). John Askew contacted the reporter and managed to get a balanced reply published putting the motorised green lane user’s perspective the following week.

As people started to offer help in reply to additional information I had posted on the TRF Trial Facebook page I decided to get more involved.

From reading previous TRF and the Green Lane Association activity in helping conserve green lanes I realised there was a risk the council would, or could, do little or nothing. Or it would take a long time to repair the lane, MCC like most councils being strapped for cash and having more pressing priorities. Further still, there were noises of a campaign to challenge the green road status of this lane.

The Green Lane Association arranged a groundworks contractor to visit the site and quote for the repair work. I thought it worthwhile getting a competitive quote and a new South Wales TRF member offered and did quote for the work. The Green Lane Association ultimately stayed with their contractor, A P Price, who they had previously recruited to repair a green lane in in North Wales. The council’s requirement for £5m public liability insurance on highways limited who could do the work.

Monmouthshire County Council agreed to provide the stone needed to grade the muddy part of the lane.

At about the same time the Green Lane Association asked if the TRF would like to go halves with the repair cost. Reading the conversation section of the TRF website led me to think that we could do this by raising funds via the Just Giving site and the TRF’s matched funding scheme. I set about compiling the Just Giving page and was staggered to have the required £750 in just over 24hrs from starting it. I promoted it on the TRF Trail and local TRF group Facebook pages as well as through West Glos and Forest of Dean motorcycle club. A couple of great donations from Bristol TRF and WG&FDMCC and in total 44 donations from the trail riding community meant the fund raising was in a good place. I submitted the application for matched funding to Dave Carling the TRF Conservation Director and he replied that this is just the sort of initiative that the scheme was set up for.

The Green Lane Association/Treadlightly footed half the contractor’s cost and the TRF members and West Glos and Forest of Dean MCC the other half.

A date was set for the beginning of March to conduct the repair work. Fortunately the landowners on both sides trimmed the hedges unprompted a few days before, and a little further pruning in the lane provided the access needed for the machinery. The contractors were offered volunteer help but declined. This was probably no bad thing from a safety perspective as the lane is quite narrow and no wider than a dumper truck from the top down to the slip. It was also quite muddy at the slip and the machinery needed to move up and down the lane frequently to move the stone. However, many thanks to all those who did volunteer.

The stone was dropped at the top end of the lane and the contractors moved in to start the repair on Friday 1st March. The stone had been dropped right at the lane entrance, so the contractors had to clear a path through the stone to get their machinery onto the lane. They used a digger to level the lane and distribute the land slip soil and then back filled the uneven and softer parts of the lane with the stone using a dumper. They also removed the remains of the tree stumps that had slipped into the lane. The landowner recruited labour to trim the trees on the North side in preparation for re-fencing at some future point. 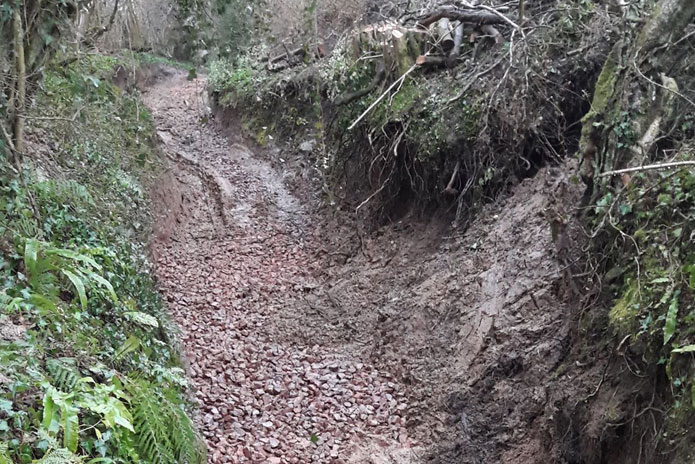 The bank along the North side of the lane at the section of the sunken part of the route remains susceptible to water erosion. It is hoped that cutting the trees back at this time of year will promote root growth and help to bind the bank soil.

The work by the contractor took three days to complete and, on the 9th March, just nine weeks after the original slip the road closed signs had been removed and the lane reopened after a council inspection.

Great work by all concerned and another example of motor vehicle user groups working together to keep green lanes open.

Footnote:
These types of projects are only possible with the money we raise from your membership fees. In this day and age, councils have little money to spend on the minor road network and, if we are to keep some of our best lanes open, then we need to dig deep. Thanks to all of you who made this project possible – that’s each of you reading this! We really appreciate your support.