A man goes into a pub with a frog growing out of the top of his head. The barman says ‘What happened there then?’ and the frog says ‘Well, it started as a wart on my foot...’

And so, in a similarly unexpected fashion and following a small idea about getting together some people interested in Surrey’s byways, I found myself on the weekend of the 19th May, standing in one of the county’s premier byways barbecuing bacon sandwiches adjacent to mounted police, two trail bike police, the Forestry Commission, the Trail Riders Fellowship, National Trust Rangers, the Mole Valley Rural Crime Unit, Surrey County Highways and RoW Officers, plus various Green Lane Association members, as we engaged with the public about responsible byway use. And it started as a wart of an idea...

Initially just a thought I suggested after a byways access committee meeting, the local Rural Crimes policing unit really took it on as part of their county wide ‘Dragnet’ operation and as a result a good number of user groups quickly expressed an interest. We sent out three teams to three locations on what I had expected to be heavily trafficked sites, with sandwiches and drinks available at two of them to try and create a bit of positive engagement – to give back to the various user communities as well as the more usual ’nanny’ behaviour or helping people stay on the straight and narrow.

The Frensham site hosted by Gareth Jex had a lot of interest, with many walkers and horse riders stopping to chat. At Wolvern’s Lane we were mainly dealing with mountain bikers and trail riders who stopped for long talks with the Forestry and TRF. We did not see a single recreational 4x4 user – which is disappointing but I guess the luck of the draw.

The Sheepwalk Lane guys had pretty much only themselves for company and I am not sure they enjoyed it! Sorry lads, but I have often met miscreants there so there must have been something good on TV that day . A mixed bag, but overall I am confident of the following results:

• Relationships between the various user groups strengthened and developed. We (almost) all had a jolly good day out!
• Very high ranking police officers on site for some or all of the day with resolutions to support Byway use and put rural crime issues on the agenda
• Great PR opportunities generated for each group present and across the media
• Good numbers of bikers of all types engaged and byway use discussed, similarly large numbers of walkers.
• Plans made for further events including night time sessions to actively pursue the off-roaders who cause damage on a regular basis
• 70+ bacon sandwiches given out (possibly the most important statistic!) 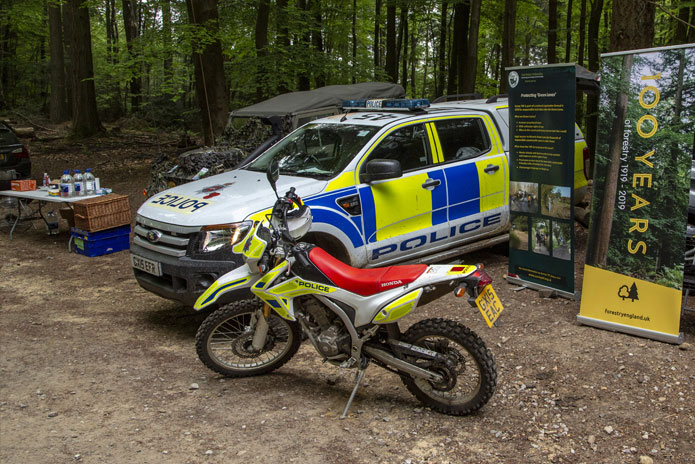 Next year, just two locations and perhaps a Saturday afternoon and evening time slot might produce more contact than the Sunday morning did, but we all left with positive vibes and lots of good will between us. Best of all, the assurance that the authorities are behind us in the cause of promoting great Green Lane use and they know we all mean business.
Stuart Boreham, Surrey Rep